When I was younger, I had jiffy pop. Who couldn’t resist popping popcorn in a disposable aluminum pan? 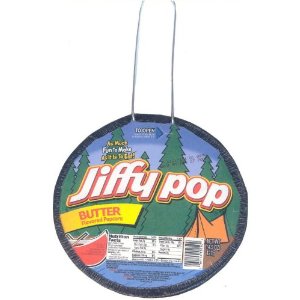 I loved to watch my mother heat it on the stove and see the big aluminum foil cloud full of popcorn rise. I wanted to eat it the second my mother would take it off of the stove. I also remember the thrill I had when I was old enough to make it myself. I would always try to see how high I could get the aluminum foil fill with popcorn without burning it.

Some where over the space of time, microwave popcorn came on the scene. This was a constant friend in high school and college for a quick snack or even meal. However, studies were released that showed that microwave popcorn was bad for you because of a chemical called diacetyl, which was found to cause scarring of the lung. Ironically, called “popcorn lung” this disease was found in many popcorn factory workers. Supposedly, you can only get popcorn lung if you breathe in the fumes from microwave popcorn that contains this ingredient, but I didn’t want to risk my lung health. But I didn’t want to give up popcorn either, so I switched to popping popcorn with air.

I was lucky that my friend Jade gave me her air popper prior to her moving across the country. Since then, I have been popping popcorn with that and adding a little melted vegan butter (earth balance)  and sea salt to it. However, I missed the satisfying taste of the jiffy pop and my microwave popcorn.

One day my friend Katurah suggested I pop it on the stove like she used to do when she was younger. Apparently, this is how my mom used to eat popcorn when she was younger as well…lol She told me I just needed a little oil and some kernels. The first time I tried this, I burned the bottom of my pot beyond recognition. It took me forever to clean it. After getting a good laugh out of my failure, Katurah showed me how to do it herself. I realized that it was all about the oil to kernel ratio. You really want to make sure that your kernels are coated in oil. You also want to make sure you have a top for the pot you use to cook the popcorn in.

Last night, I wanted a lot of popcorn, so I put in about a 1/2 cup of kernels in a big pot and thoroughly coated them with oil. You may think you are adding a lot of oil, but you are not. You just don’t want your kernels to be swimming in oil. I put the stove on high and within 2 minutes, I heard kernels popping. Once it got really popping, I took the pot off of the heat and let it finish popping. Here is my result: 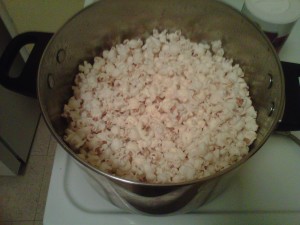 I took this, poured it in a large bowl and added some salt and nutritional yeast, which is a popular condiment with vegetarians and vegans. It is cheesy in taste and provides a lot of nutritional supplements like B12.

I didn’t need to add butter because the oil gave it that flavor. Preparing popcorn this way brings me back to my childhood. It has that same feel of jiffy, but better! And definitely more flavorful than air popped popcorn.

And with my popcorn in hand, I curled up on the couch last night for a night of classical movies and quality time with my cat. I couldn’t think of no better way to spend a snowed in night.

This entry was posted in being present, cooking, do it yourself, friends, recipes, vegan, vegetarian and tagged popcorn, recipes, vegan. Bookmark the permalink.

4 Responses to My popcorn evolution