A tale of contradictions(part 1): Vegan by night……

A few weeks ago, I cashed in my groupon to view a vegan cooking demonstration (with lots of samples) at the Viking Center. If you don’t know about Viking, they make those lovely stainless stoves that are found in restaurants and in the kitchens of serious cookers. I definitely envision a Viking stove in my future home someday:) (Picture of my dream kitchen is from here.) 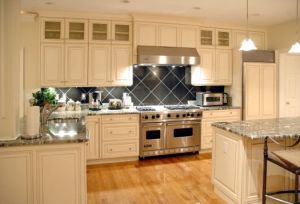 Anywho, I digress. I felt like I was in a horror movie driving to the place. There were hardly any lights on the streets and it was in the middle of nowhere. I ended up following a car that seemed like he was going in the same way and luckily found the building that way.

When I arrived, I checked in and was greeted by some of the staff. We had a chance to peruse their newest appliances with a glass of wine(or two)while they were setting up the room. At 6:30pm, we were invited into the demonstration area, where rows of tables with plates were setup in view of a preparatory kitchen. The guest chef of the night was Chef Mark Shadle from the new restaurant G Zen in Branford. 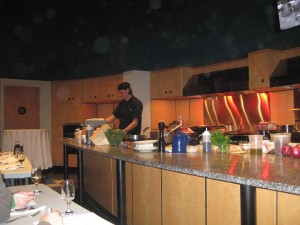 Chef Shadle was really cool. He had the opportunity to go to the White House and work with Michelle Obama on the “Chefs move to school” initiative. In addition, he and his wife, Amy operated a mobile vegan and vegetarian truck called G Monkey prior to opening G-Zen last month.

He had a pretty ambitious menu and he was able to execute every single dish in about 2 hours, which was very impressive. By the end of the night I was stuffed with his mushroom barley soup, sunflower bread with cornmeal, grilled “cheese” with spinach pesto, spanokopita, and a chocolate cream cous cous terrine. Best of all, he gave us the recipes for everything. I am already making plans to make the bread!

First thing Chef Shadle started was the sunflower bread. I was quite amazed how quick he was able to make it—it only took about 1 hour and a half. And it was definitely tasty!!!!!!!! 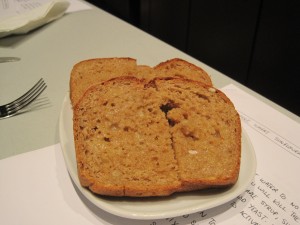 Next up, was the spanokopita. He used roasted tofu in the place of the feta in this dish and it was excellent! I didn’t even miss the cheese! Chef Shadle sprinkled the spanokopita with a “spice mix” that included paprika and curry powder(amongst other spices) that gave it a nice little twist. 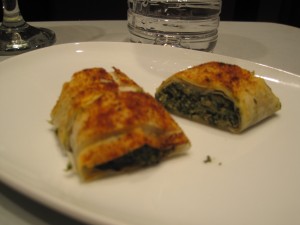 Next up was the mushroom barley soup. I didn’t think it was going to taste good, but I was pleasantly surprised. The tamari and fresh veggie stock gave the soup loads of flavor. If I was at home, I might have licked the bowl…lol 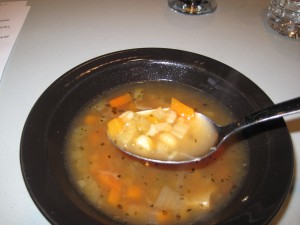 By this point, I was starting to feel stuffed, but I had to make room for the grilled cheese. Chef Shadle made a spinach pesto(that had almonds instead of cheese) and added caramelized onions and some Daiya mozzarella cheese (vegan cheese) to slices of the sunflower bread and grilled it. I didn’t think I would like vegan cheese, but I was pleasantly impressed! Deelish!!!!!!! 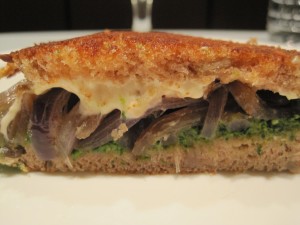 Last but certainly not least, was the dessert–a chocolate cream cous cous terrine. We looked at Chef Shadle like he was crazy when he said he was going to use cous cous in a dessert but boy were we wrong. The cous cous gave the dessert an almost crunchy texture, which melded nicely with the silky smooth chocolate cream filling(which was made with tofu). Doesn’t it look yummy? 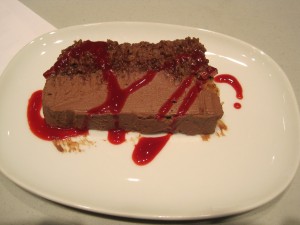 It was amazing! I feel that Chef Shadle taught me a lot that night. For one, I didn’t know that there were different types of tofu that is meant to be used in different dishes. For example, silken tofu is better for desserts, while the hard block tofu is better for savory dishes. Secondly, vegan cheese can be tasty (if you get the right one). Definitely the Daiya mozzarella was good (not real cheese, but it could do).

Overall, it was a great experience and I learned a lot about vegan cooking. I definitely will continue to “flirt” with veganism. If I ever do give up meat, I know it will have to be a gradual process. I don’t think I could do it cold turkey.

How about you? Could you give up meat? Why or why not?

2 Responses to A tale of contradictions(part 1): Vegan by night……