During my visit with my brother and his family a few weeks ago, we headed to the Pennsylvania Renaissance Faire. I was truly excited, because I had never been to one. I kept thinking about munching on a large turkey leg as I walked around taking in all the action. I wasn’t quite prepared for how large it would be–it was almost the size of an amusement park.

Apparently, people take these things very seriously. Many people were dressed up in costumes. In fact, I was truly impressed with one woman who I met that told me that she took four months to sew her dress: 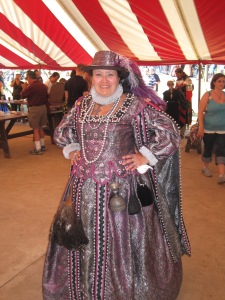 She hand stitched all of the intricate beading and trim. Now that’s dedication!

Now, no renaissance faire is complete without jousting, so my family and I headed to the jousting field immediately after arrival. The spectators were placed on two sides: good and evil. I was happy that we were on the good side, because the people on the evil side were called “wenches”. I can’t say that I would be happy to be called that…lol 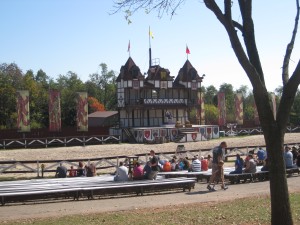 In addition to jousting, we got a little taste of falconry as well. I didn’t get a chance to take any pictures of that because we were warned that it might draw the birds to us. And I wasn’t in the mood to try to test if the falconer was telling the truth or not. Those birds had some sharp claws and beaks….lol

There were quite a few historical inaccuracies, but I think most people weren’t being as overanalytical as I was..lol. First of all, they had Henry VIII alive at the same time as Elizabeth I. There is no way that Henry VIII could have been king the same time his daughter was queen.  Here’s my sister-in-law posing with my nephew and Queen Elizabeth I:

Henry VIII was around earlier:

For me, the best part was the food. I didn’t get the turkey leg as I initially wanted because I was tempted by something else–brisket. I ended up talking to this guy dressed up like Zorro and he told me that he had come to the fair for years because of the brisket. So I figured that must be the thing to try. I ended up waiting in a line for about 20-30 minutes and ended up with pure heaven:

For $7, it was a great deal! It came with baked beans and some fries on the side. Very tasty and worth the wait! The brisket was melt in your mouth good. I called myself cutting back on some carbs by only eating the bottom part of sandwich bread. If you find yourself at the PA Renaissance Faire next year, try it!

Overall, it was a great time had by all! I think everyone should go to a renaissance faire at some point in their lives:)

This entry was posted in being present, family and tagged family, Food, renaissance fair. Bookmark the permalink.