As I have stated numerous times, I love groupon and living social. Because they have such great deals, I often find myself trying new things more often. Case in point, The Fig Cooking School. Fig is a gourmet cooking school located in Hamden and was named after the teacher’s three daughters: Francesca, Isabella, and Gabriella. I finally redeemed my coupon on Friday for her 20 minute meals class.  On the menu was seared pork tenderloin medallions with pears in a port wine sauce, fettuccine alfredo with shrimp, salmon fillet with creme fraiche, herbs and whole grain mustard and spinach greens and roasted grapes with a champagne vinaigrette. She was also kind enough to add an extra dish, penne with a creamy saffron sauce and pancetta.

I arrived at the school (which was the teacher’s house) promptly at 6:30pm, where I was warmly greeted by Hiede (the teacher) and her eldest daughter.  After I set my bag and coat down, I walked into the kitchen and greeted the other members of the class. She has such a wonderful kitchen that practically invites you to pull up a chair and eat. If I had a kitchen like that, I would cook every day!

After the class and I put on our aprons and washed our hands, we started on her daughter’s favorite dish, the penne with a creamy saffron sauce and pancetta. I have never eaten pancetta before, but it is yummy! It has a bacon-like taste, but it is much lighter and flavorful. In addition, the saffron gave it such a unique flavor. I would have to say this was my favorite dish of the night: 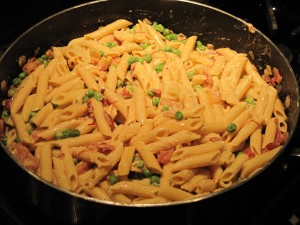 Did I say it was fantastic???? I will definitely be making this again.

After we made this dish, we quickly moved on to the fettuccine alfredo with shrimp. I know you are thinking, it is a common enough dish, but what made hers so unique was the white wine and red pepper flakes she added to the shrimp. I was a bigger fan of the shrimp, than the fettuccine, but it was still excellent. I think I was still comparing this dish to the previous one:

Next up was the seared pork tenderloin medallions with pears in a port wine sauce. I was very skeptical about this dish, after all pears, pork and port wine didn’t necessarily seem like it would taste good. On top of that grapes were in this dish. On paper, it did not seem very appetizing, but it was YUM! While we were making the pork, we made the spinach salad to go along with it. The roasted grapes made such a difference! 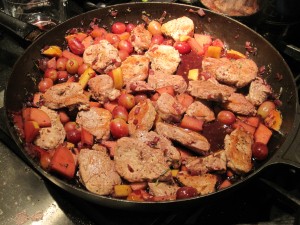 In order to roast grapes, you preheat an oven to 250F and line a rimmed backing sheet with parchment paper. Then place the grapes on parchment and toss with olive oil and then arrange in a single layer and sprinkle with seat salt. Then you bake the grapes for 2-2 1/2 hours.  Obviously Hiede had to do this before we arrived. The result was very tasty. In addition, another secret we learned was to toast nuts in the oven before you use them in a meal. She toasted walnuts for 5 to 7 minutes at 350 F and they tasted so good! I usually don’t like walnuts, so that’s saying something.

Our final dish of the night was the salmon fillet with creme fraiche, herbs and whole grain mustard. I have never tasted creme fraiche before, but its wonderful! And it’s readily available at whole foods for under $4. If you never had creme fraiche before, it tastes like a milder form of sour cream(and it has that same consistency). I felt this was a very light dish and was a wonderful way to end the class. It as so good that I picked up the creme fraiche from trader joe’s and some dill, and will make it again very soon:) 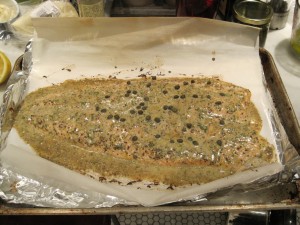 Overall, it was a great experience and I definitely plan to take another class in the near future. It was a very intimate group; Hiede told us that she usually has 10 or less in a class at a time. I learned a lot of technical cooking skills and am now coveting an immersion blender:)  If you are in the area I would recommend you take a class if you can. Here is the link to her school and to her blog. Bon appetit!

This entry was posted in being present, cookies, cooking, do it yourself, empowerment, food, martha stewart eat your heart out, recipes and tagged cooking. Bookmark the permalink.