From this past Wednesday until Sunday afternoon, I had been at a conference for work in Newport, RI. One thing that I always look forward to is the food that I will be eating while there. Since I was going to Newport, I knew I was in for a lot of seafood, and they didn’t disappoint. It was really cool that we were there for restaurant week, so we got great deals on three course meals. Though I ate a lot, I tried to balance it out by keeping up with the “couch to 5K program”. (I finished up week 3 while I was there.)

Our conference was on Goat Island in Newport, at the Hyatt Regency. It was a really nice hotel, but some of the staff were kinda rude. The front desk receptionist had placed me in a room near the elevators, which wouldn’t work for me because I am such a light sleeper. When I asked her to move me, she placed me in the basement. At least it was quiet…lol. More importantly, my room had great views:

After I got settled and took a much needed nap, I headed downstairs to the hotel’s restaurant for dinner. I wasn’t that hungry, so I settled on a lobster cob salad that the waitress had recommended: 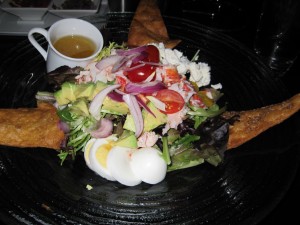 The salad had lobster, eggs, mango, red onion, tomato, avocado, lettuce, and some goat cheese. I had never eaten a cobb salad like this before and needless to say, my stomach wasn’t very happy with it. I ended up having to have a cup of tea and go to bed early. However, I woke up fresh and after a quick workout decided to try the restaurant again for breakfast. They had this breakfast buffet that was wonderful. I really wish I could have eaten the bacon because it looked yummy, but I settled on a veggie omelet, fruit, potatoes and some toast(oh yeah, and one slice of french toast…lol).

The most memorable dinner was the night of “food and fellowship”. Food and fellowship is set up by the conference organizers and you just sign up for a restaurant with a whole bunch of people who you don’t know (that are also attending the conference) and go out to eat.  My group went to the pier restaurant and I decided to take advantage of the restaurant week deals and order the lobster. For $30, I had a great salad, full lobster  and french fries(don’t ask, I was craving them…lol) and a brownie sundae. The steamed lobster was covered with a shrimp and scallop stuffing, but I moved that out of the way and dug in to the lobster. I even had a bib on. 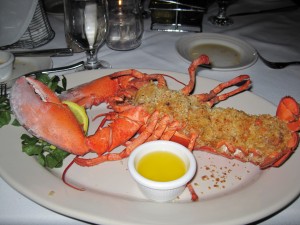 After I ate all of that and the french fries, I was stuffed. I was also concerned that I wouldn’t be able to eat the brownie sundae. However, I had nothing to worry about, because the portion size was very small. In addition, I loved the way how the chef presented the dish:

Very creative, right? I thoroughly enjoyed my meal and the company of strangers. It was a nice evening.

The final night that I was there, a few other advisors and I were taken out to dinner by this Danish study abroad program. They got a private room with magnificent views of the water. I ended up eating a cherry and gorgonzola salad, salmon (that melted in your mouth), and a slice of chocolate mousse cake. Before the dinner started, the sun started to set and it was absolutely breathtaking. 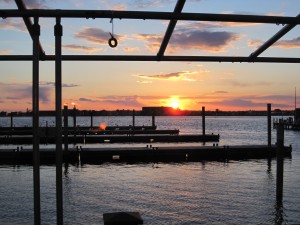 Overall, though it was a long conference, I felt I learned a lot about my current profession as well as experienced great food and company. I am looking forward to my next trip in a few weeks………:)

This entry was posted in being present, food, restaurant reviews, vegetarian and tagged Newport, restaurants, Seafood. Bookmark the permalink.